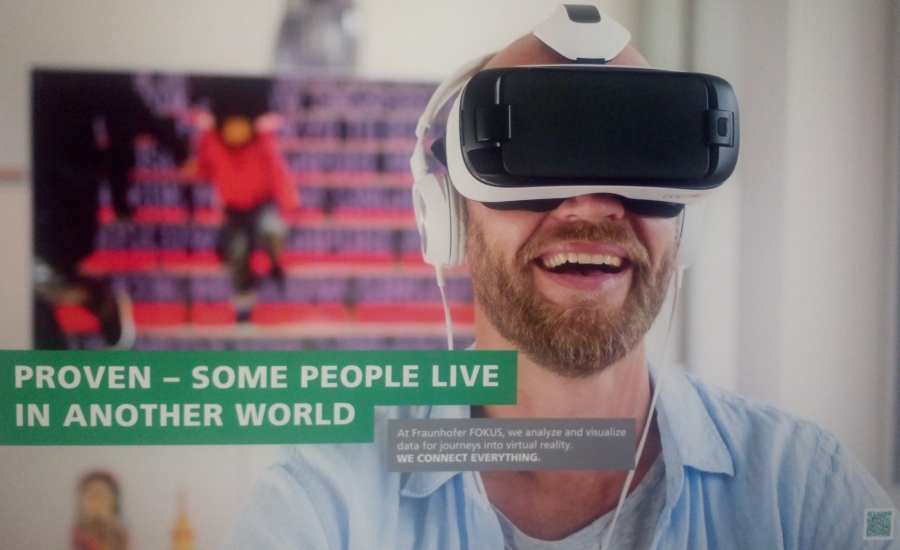 Virtual Reality is one of the most ambiguous things for me: on the one hand it promises a huge new world of opportunities but on the other it remains underrated and suffers from a lack of funding because of its implicit financial benefit. Nevertheless, the complexity of VR subject attracts lots of scientists and inventors of the modern digital industry segment.

7th FOKUS Media Web Symposium in Berlin is one of the best proofs of Virtual Reality being essential for modern digital world and its nearest future. The conference is held by Fraunhofer Institute for Open Communication Systems and the organizers have made a really awesome job on connecting people around VR and 360° videos` issue.

The conference included 2 days and one meet-up night. I have managed to visit only the first day of the conference but have gathered lots of interesting information. Let me now share some of the most exciting pieces of the information that have convinced me about brilliant future of VR despite of its current problems.

Are not time travel exciting? Of course, they are not yet achievable in our plain reality but you can sense them even now with the help of Virtual Reality. Westdeutscher Rundfunk (well-known German TV and radio company) has a pleasant surprise for those who would like to travel into past. Their Time Capsule project is an amazing example of 360° interactive experience right inside your browser.

Another beautiful work form WDR is dedicated to Cologne Cathedral. This VR project presents you a unique opportunity to travel inside and outside the Cologne Cathedral and even takes you through time to see how this monumental church was build and how the surrounding had been changing within 1000 years.

And the third project that had really amazed me was “Glückauf” (which means “Farewell”). The project is dedicated to the exploration of the last coal mine in Rhein-Westphalia region. It should be a very interesting experience anyway but you can wonder why the project is called “Farewell”. The reason is that this coal mine will be closed in 2018 and it would be no more coal mines in entire Rhein-Westphalia any more. That is why “Farewell” becomes another time capsule for future generations.

Are you able to switch your view now? How about an over than 100-years old science fiction that had predicted most of the modern inventions? I am now talking about the genius of Jules Verne who have predicted video conferencing, food delivery service, child birth regulation in China and a couple of other mind-blowing (for his time) technologies. If you are interested, then you should read one of his underrated stories which is called “In the Year 2889”.

Back to Present Problems

Virtual Reality is obviously exciting in terms of exploring and time traveling. But what about present and vital problems? The main problem remains in the lack of profitability. Just looks at all the examples mentioned above: they simply have no marketing value and are created by media giants who can afford funding innovations without waiting any profit from them. Small and medium-hand business still sees no use in VR and 360° videos in most cases.

The problem was voiced by John Luther from JW Player. He shared the sad experience of creating VR and 360° videos for his clients: only 0,06% of target audience is viewing Virtual Reality projects. The main reason is the lack of accessibility: virtual reality glasses remain inconvenient and relatively expensive for the most part of users.

Did We Forget Something Important?

Yes, there is a thing that is actually remains frequently forgotten despite of its importance – the audio. When we are talking about VR, we usually mean video but forget about the sound. It is a big mistake, however.

Fortunately, audio industry did not stand still and had created everything a sound producer could need for creating an immersive audio effects for virtual reality. One of such innovations was presented within 7th FOKUS Media Web Symposium – the 360° sound recorder. And it is actually the thing Sebastian Gsuck from MediaApes agency is holding in his hand in the photo above. The device is not very expensive but allows anyone to produce really amazing 360° sound for virtual reality.

What Can Future Bring?

There are of course thousands of possibilities to develop virtual reality in different directions. Daniel Brückner and Sönke Kirchhof have slightly lifted the veil of future opportunities by showing their companies` use cases of virtual reality for games and fully interactive videos.

There are still lots of problems in the process of creating such VR projects and there is even no confidence in the future of such technologies because CGI effects are much cheaper and simple in producing. But enthusiasts did not stop their researches and I can only applause to their passion and patience.